The latest release of Unreal Engine 4 may have accidentally revealed a next gen console, Erebus.

Erebus appears alongside PS4, Xbox, Switch, and other platforms, and could hint a new Playstation console, you can see the code yourself, and come to your own conclusions, as it was posted over on ResetEra after it was discovered by forum member Gemüsepizza.

According to a report from VG247, who cited two sources familiar with Unreal, it looks like a console leak.

“It looks like it’s hinting at a new console. In engines you tend to have like a bunch of values to tell you which platform you’re on because they all need to run slightly differently,” the first source said. “The whole Erebus being a god thing makes sense with the Sony codename branding.

“The [first] screenshot is just the value being set. And the second one is a little bit of code that looks like it’s adding cross platform play.”

“All this alludes to is a possible unannounced platform through a single source file change, which is where the online subsystem stuff is (‘online subsystem’ is an abstraction layer for interactions on online services such as PSN, XBL, Steam, etc).” 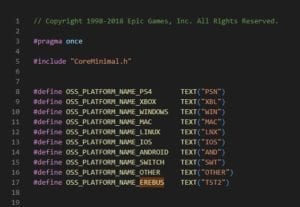 Spelunky 2 Arrives on Playstation, PC in 2019

Game publisher Soedesco has officially acquired 100% of the share in Spanish studio Superlumen for a pricetag that has not been disclosed.

Sperlumen, which was founded back i 2015, specializes in virtual reality development, and is the team behind the point-and-click game Desolatium, which is set to make it’s official arrival later this year.

“We strongly believe the acquisition of Superlumen to be a great long-term strategic decision,” Soedesco Ibericá general manager Barnando Hernandez said in an official statement. “The studio has a talented and passionate development team, a strong brand identity and a lot of creative potential which we intend to leave uncompromised as we move forward. We’re looking forward to bringing new IPs and games to our audience in the coming years.”

“After 6 years of developing virtual experiences for prominent Spanish brands, we have decided to focus more on developing our own IP” Superlumen CEO Juan Cassinello commented. “We are eager to work and learn alongside our new colleagues and create the best possible video games for our audience.”

Microsoft claims that Sony has been paying video game developers to keep their games off the Xbox Game Pass subscription service offering, according to VGC.

As part of a document sent to Brazil’s Administrative Council for Economic Defense (CADE) to justify its proposed acquisition of Activision Blizzard, the company claimed that Sony actively attempts to “inhibit growth” of Game Pass by trying to prevent content from landing on Game Pass.

“Microsoft’s ability to continue expanding Game Pass has been obstructed by Sony’s desire to inhibit such growth,” the company said in the documents. “Sony pays for ‘blocking rights’ to prevent developers from adding content to Game Pass and other competing subscription services.”

Additionally, Microsoft called Sony’s concern regarding the potential that Call of Duty could become an exclusive Xbox title “incoherent”, pointing to Sony’s own exclusivity strategies related to Playstation.

“It only reveals, once again, a fear about an innovative business model that offers high-quality content at low costs to gamers, threatening a leadership that has been forged from a device-centric and exclusivity-focused strategy over the years,” Microsoft said.

Square Enix, the team behind the classic franchise Final Fantasy, has officially released their financial earnings for the three months ended June 30th, 2022, and numbers demonstrate a drop in sales.

Square Enix attributed the decline of HD Games to the lack of game releases for the quarter, while also adding that its MMO Final Fantasy XIV continued to see an increase in its monthly subscribers.